So, who is Duke Niklas, I hear you ask? Well, we are nothing if not about the family history, so let's take a look.

Bror was the son of King Peter. So, my dynasty started Stenkil-Inge-Boris I-Peter-Boris II-Saga-Iliana. We are now backing up to the line of Peter, with his nephew Niklas (Saga's first cousin, the late Iliana's first cousin once removed.) This is who were are depending on to reclaim the throne.

I am a Duke four times over, holding the Duchies of Uppland, Finland, Ostergotland and Halsingland. Bror is going to inherit two, and Lars two. This is the problem with gavelkind succession.

I am currently at war with the Teutonic Order, and losing. Since I started it, I wouldn't lose anything but a bunch of cash by surrendering. Still, I'd rather spend my money on mercenaries, so let's see if I can use them to win a battle before I run out of money.

And...the people demand that I be the King of Nordiarke. It works! It's 1252, and I'm back in charge of a Kingdom. I just need to figure out how to get Sweden back...

And...there are two claimants to my throne, and an invasion from a Norwegian duke. Things are going downhill fast...

I hold out until 1260 by surviving two claimants and giving away stuff to the Norwegian duke. But I can't kill another pretender, and it's back to Duke Niklas of Uppland.

Of course, once 1261 rolls around, it's time for somebody to start a revolt seeking to put me back on the throne. I can't join in for...reasons... But I can root them on.

It took until 1268, but I am back on the throne. Time to consolidate power.

Or not. I hold a grand tournament to make myself more popular, but all it seems to do is kill of some unfortunately guests. By 1269, there's a new revolt. I have almost no troops.

Literally, the rebels had 10 times the amount of troops I did. I hold out until 1272, but now I'm back to being a duke. 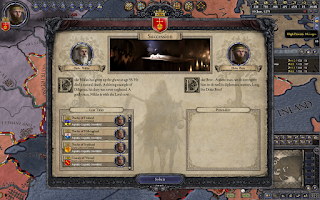