Let's start off by getting myself betrothed to a Greek princess.

I don't have much in the way of troops (see small territory above), but I can probably afford to hire the smallest company of mercenaries (the Sami band) and take over an adjoining county. The Sami band is hired out right now, though, so I'll wait. I'm 12, I have my whole life in front of me, so I can wait.

OK. That worked. Now I have three counties under my control and (in theory) bringing in money and providing troops.

I have been avoiding serving my king, since I view that as rightfully mine, but perhaps I need to chill out and play along. Besides, I might be best off taking back the kingdom of Sweden rather than Noridake. So now I'm Chancellor of Noridake.

I am saving up some money for another war, and waiting out my truce with the guy I took the last county from, when Count Rolf gets snippy with me. I try to throw him in jail, and he revolts. Maybe this is the way to get another county?

Apparently not. Though I dispatch his forces easily, the crown authority of Sweden (why Sweden and not Noridake?) does not allow for revocation. Maybe I could fabricate a claim?

While I am waiting for the truce to expire, my stupid king gets into a war and gets one of my holdings looted, so I can't really raise the number of troops I wanted. At least my wife is pregnant. But it's 1289 and I'm not really building up my holdings enough.

It's 1290, my holdings are still occupied, but at least I have baby Cecilia to improve my spirits. I am thinking of going ahead with my war, if I can hire one of the discount mercenaries like the Sami band or the Finnish band. I am waiting to see if they free up.

By 1298, I have taken one of the right type from Sweden. I spend a lot of my coin on mercenaries to ensure a quick victory. I have the King of Sweden as my prisoner, so that's nice. I think now I have to move towards independence from Noridake, though.

OK, that worked. I am now the "Petty King of Uppland" as well as the Duke of Ostergotland. I think if I claim one more duchy, I can form my own kingdom. If I wait 10 years for the truce with Noridake to run out, I can grab one of their duchies. I can attack Sweden in 7 years, but only to get a county. Denmark and Norway are possible targets, but only for counties, and they are too strong.

Fortunately, a change in rules allows me to go after Noridake early. By 1305, I have the Duchy of Halsingland. Confusingly, that part of my realm appears to be part of Noridake. Once I get 300 gold, though, I can form my own kingdom.

And I'm the King of Uppland. I think now I have to use my ducal claims to get counties added to my realm, but I am not strong enough.

Once I am strong enough, I press claims against the King of Jerusalem, who weirdly controls Scandinavian territories. It works! I haven't posted a map in a while, but here's my purple kingdom.

I can press further claims, but I am now listed as "threatening". Let's replenish the treasury and wait until that threat level drops.

The threat level has dropped, but I am still waiting for that treasury. I marry my only son and heir off to a Polish princess and get an alliance with Poland out of that. Then I spend my treasury on usurping the Kingdom of Noridake, so I have that back.

For now, I am keeping both kingdoms, but I don't want a situation where I lose one, so I am thinking of destroying one. With my son Matt and his son Kettil in the line of succession, I think I'm OK for now. So I follow my method of waiting until my treasury builds up, and then finding some place to expand. In my case, it's the petty kingdom of Finland, so by 1317 I have expanded even more. 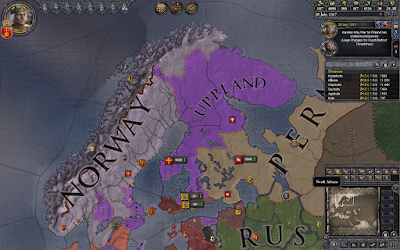 I vassalize another ruler, and then by 1321, I have taken another county from Sweden, which is shrinking severely. My treasury is robust enough to build up every few years to allow these wars of acquisition. My troop strength is potentially big enough to avoid having to hire mercenaries, but I'd rather be safe than sorry. 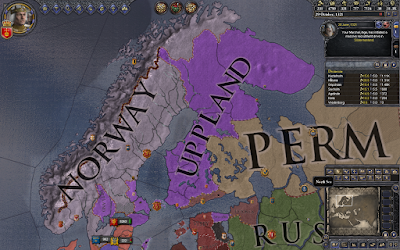 While waiting for the treasury to build back up, I try to arrest a couple of plotters, and am attacked by a Norwegian duke. I defeat one plotter, but then, I give up the ghost and replaced by my apparently incompetent son... 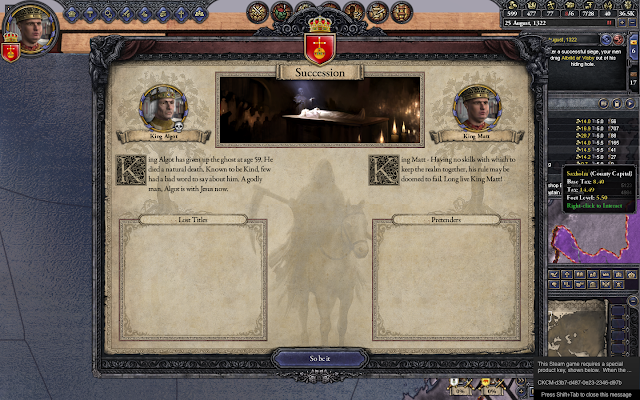