May 20, 2018
King Boris is only 11, so he doesn't have any kids to name as heir. We'll stick with Prince Chopper (hey, I name these on the assumption they won't inherit) until Boris comes of age and can father some princes of his own.

I married my sister off to the King of Rus, and was rewarded with an alliance. I suspect this will come in handy. I am planning to move on Satakunta (Finland) when I grow up.

Five years fly by, and me and my buddy King Sviatopolok of Rus try to take down Satakuna. The attrition in the north is just terrible, though, and it takes up most of the treasure I've spent a couple generations putting away to win the war. But win it I do, and I am halfway to my goal of turning the Baltic into a Swedish lake. It is 1141.

I have been on the throne 10 years. I think I am eligible to tighten up some of the laws of the kingdom, but after all that war, I want to make sure people get happy again. Also, I have two daughters now, so my brother is still my heir.

Things are moving pretty rapidly now. People are forming a defensive pact against me, and I've been called into my brother-in-law's war again...rebels? I think. Honestly, the politics of the time period are pretty confusing. Okay, he's fighting both rebels and Perm. I don't have as many troops as I'd like after that last war, but let's see about attacking Perm on his behalf.

The defensive pact has disbanded, things aren't going so well for my brother-in-law (oh, well), and things are a mess on the home front. My late brother Chief Stenkil left things a mess, and now his bastard son and his granddaughter are at war over some of the titles there. I think I can let that play out without intervening.

OK, Prince Chopper dies. I have a third daughter, but I need to designate an heir. There's my other brother, Prince Caesar.  I'm going to try to line up things for him while still working on producing that son of my own.

My first wife died giving birth to our fourth daughter, so it's on to wife number two (and my new spymaster).

And we have a son! He's named Peter (the game wanted to name him "Peder"), but I fixed that. So I had to off Brother Caesar in order to make room for Peter as heir...

For reasons that elude me now, the votes are favoring Peter's younger brother, Paul. I am not picky, I am just looking to pass these kingdoms down father to son, so let's go with this.

And now it's someone else...Duchess Ingegerd. Not my great niece, someone not of my dynasty. It is getting tiring killing all these rivals, and I don't think it's good for my reputation.

My brother-in-law gets me to support his revolt to take Rus back. I am doing a good job, when he dies, so I ally with his heir, my nephew.

He immediately wants my help attacking Estonia. Hey, I was the one who was supposed to take over Estonia. Oh, well. Maybe this will weaken Estonia for when I get around to it.

War goes well, as I annex Kexholm from Perm, thus getting close to Estonia.

On the home front, the electoral politics aren't great. We have my third son, Prince Hendrik, briefly as heir, then we go over to my nephew, Count Halsten. Once Hendrik loses his support, we're back to supporting Peter. I figure once he becomes an adult, he may be better able to press his claim.

I bought the "Way of Life" expansion and to my surprise was able to add it immediately.

I used some of the intrigue features of that expansion in order to ensconce Peter as heir, and then I crept a little bit more towards Estonia. 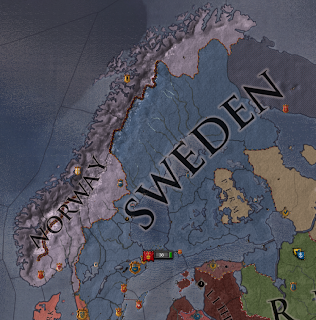 And then after 69 years on the throne, I passed the kingdom(s) along to my son Peter. That's 134 years with three rulers, starting with Boris' grandfather. Peter is too old to carry on that streak. 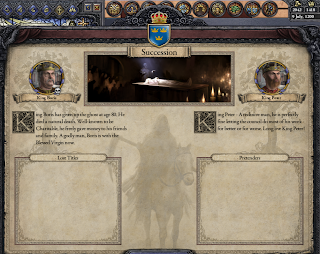