I am starting my second full game of Crusader Kings II as King Stenkil of Sweden. He is married with four sons. Annoyingly, Sweden has an elective monarchy. I really prefer some sort of primogeniture; anything else seems unnatural. Or at least gavelkind. Maybe I'll live long enough to change it.

Until then, Prince Inge is my heir. That's fine. Let's make sure he has a good kingdom to inherit. 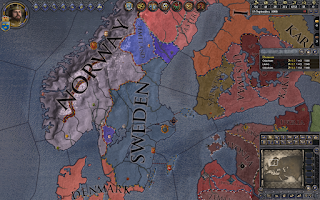 You can see what the immediate neighborhood looks like. Norway and Denmark are things, and there are some small entities waiting to be embraced by the Swedish fatherland. 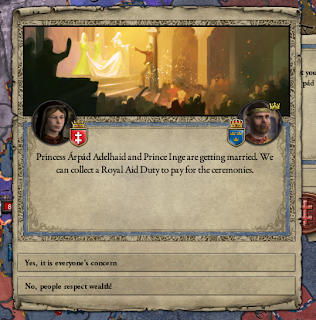 First we marry our heir off to a Hungarian princess. 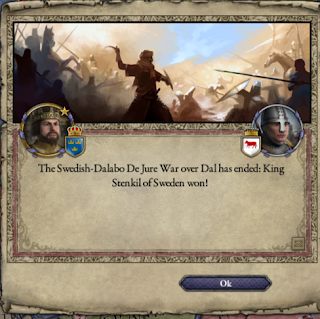 Then we gobble up Dal, a county between us an Norway we have a de jure claim on. 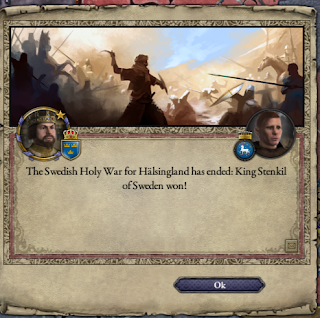 Next, here's something I get to do that I never did in my first game -- a holy war against the infidels. We look to the north and annex Hälsingland. The pagans to the north joined the war, but had no effect on the outcome. In both wars, I had about 2000 men to less than a thousand for the people I was trying to conquer. I would keep going, but my vassals are getting whiny about the levies, so I'm going to consolidate for a while.
sweden